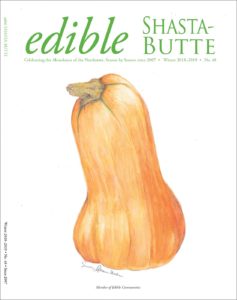 Yesterday Cal Fire Butte County declared the Camp Fire, the most destructive in the history of California, 100% contained. This morning at dawn, so high in the sky that eyes could not see what ears beheld, a flock of snow geese fl ew over the house, the first noted of the season.

Before fire containment and snow geese, we heard so many stories about fleeing the fire. Some storytellers narrated the videos they had recorded on their phones. Some used only their voices, long stories or mostly silent ones. Like many who experienced the Camp Fire, the Carr Fire, the Delta Fire, I felt overwhelmed. For many days, I wasn’t sure there would be a winter issue of Edible Shasta-Butte. Too much else was consuming. And I myself was evacuated only overnight, the evacuation order lifted the next day, with a house, a whole neighborhood to go back to. Now, the magazine is almost to our printer, thousands will be delivered to our garage, and you will have it in your hands and read this.

The day after Earl, this magazine’s publisher and my husband, passed in mid-October, I stood in the kitchen at the cutting board, chopping vegetables for turkey soup. The onions, the celery, the carrots, the chopping, what a balm. I couldn’t have guessed at the number of days since I had done real work in the kitchen, work that yields real food. Soup, cold’s comfort. I remembered washing Earl’s body with two of his caretakers, Elvis Presley singing “Wise men say. . .” in the background. Cold’s comfort. The proximate cause of Earl’s death was dehydration. He hadn’t drunk in a week, hadn’t eaten for longer.

Does that paragraph even belong here? I write it because for the fall issue, I wrote in the Grist about the impact of Earl’s Alzheimer’s disease on his eating and drinking. Now it almost seems I mocked him in that writing: irony echoes as I write. I also write the paragraph because the Camp Fire caused us to postpone a gathering to celebrate him. Everyone we knew had either evacuated or invited evacuees into their homes, and the fire raged. Earl’s death and the fire then are like 100% containment and snow geese now. I hardly know which is louder. Paralysis lifts slowly. It lifts. Someone reminded me that fire restores, and the rain this week hints so. The weight of the fire’s destruction will someday be measured in its ashes, ashes to ashes. I have seen radiance behind a woman’s tears. She was describing not only the free meal Sierra Nevada’s restaurant served her and her husband who fled the fire in Concow but the wait staff and the other diners who embodied the gift of a meal.

This issue of Edible Shasta-Butte brings you a story of winter’s gifts and recipes that require much cutting-board peeling and chopping. We have more to tell about the losses to and the gifts from our food community, all engendered by the Camp Fire. We’ll do this in the spring issue. For now, my autocorrect changes widow to window and safe to sage. Really. 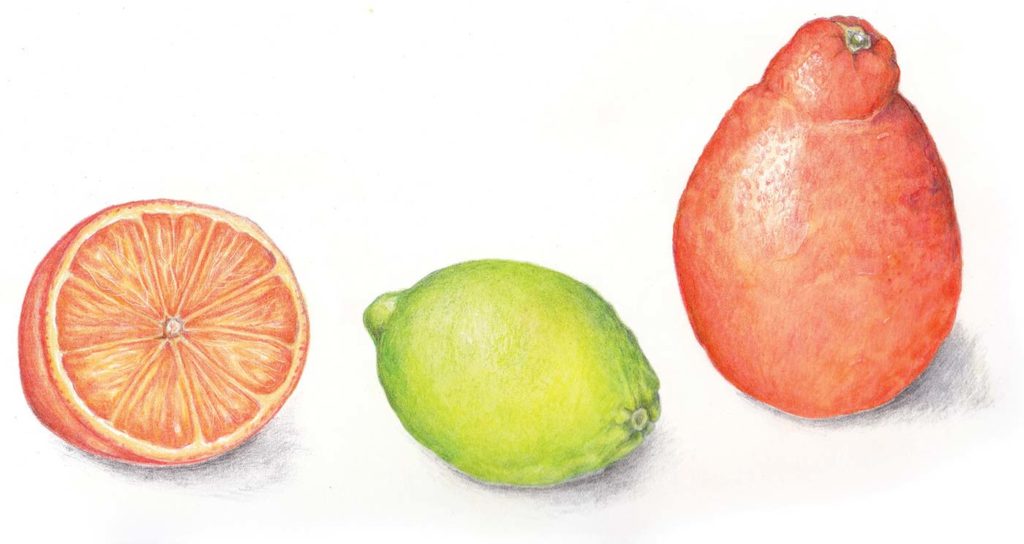 ON THE COVER AND ABOVE: For these winter botanicals, Susan Lofthouse Meade used watercolor and colored pencil for the butternut squash and colored pencil for the citrus. Both offered much in the way of texture and color; Susan enjoyed trying to capture the waxy smoothness of the squash as well as the bright bumpiness of the citrus. You can see more of her artwork on her website: splofthouse.wixsite.com/botanical-art 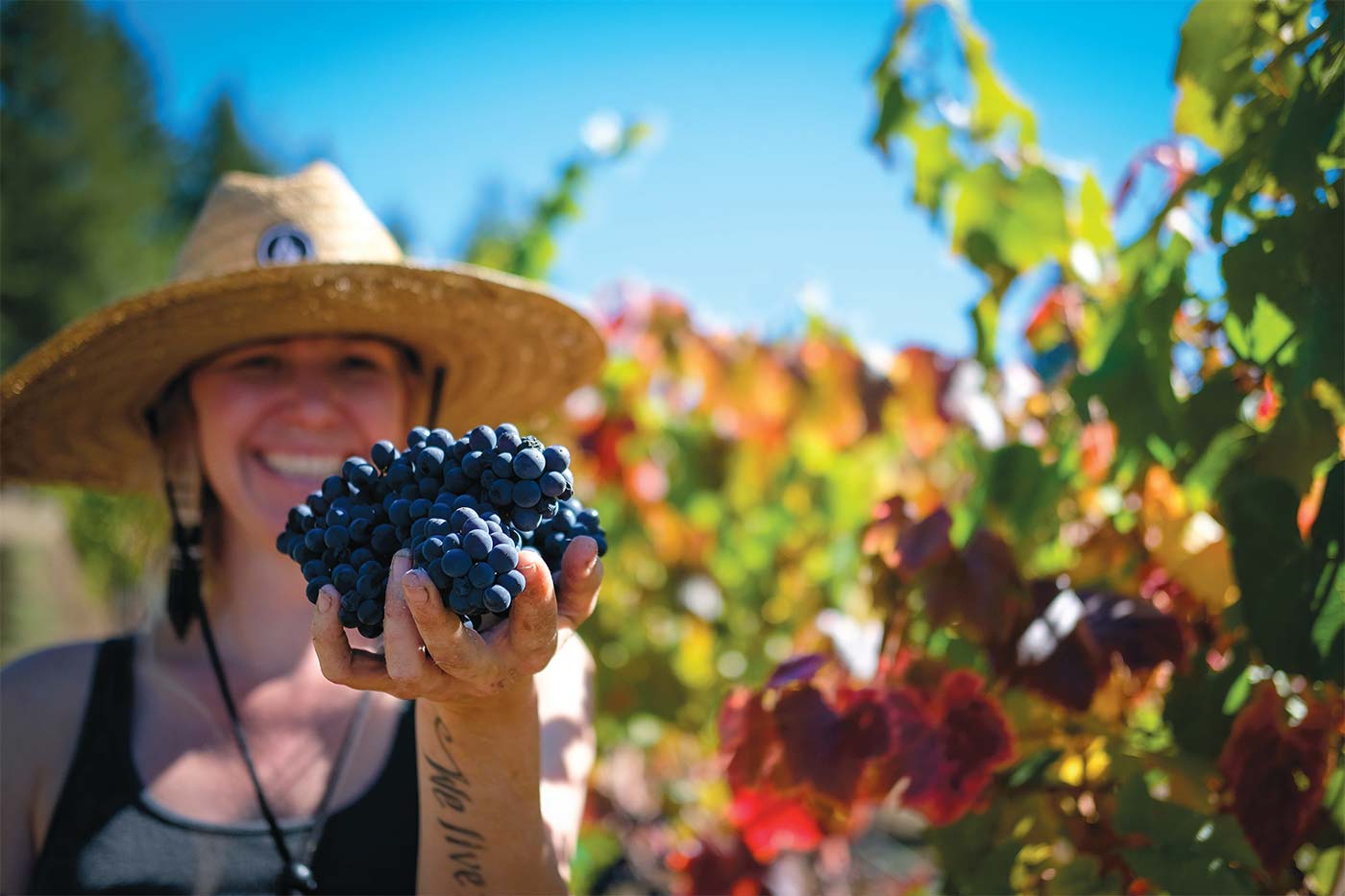 Born and raised in Humboldt County, winemaker Pat Knittel found herself driving through Napa Valley’s famous vineyards one day and thinking about home. She’d crushed grapes from Sonoma to New Zealand, yet Knittel’s mind ran to Humboldt County’s legacy of... 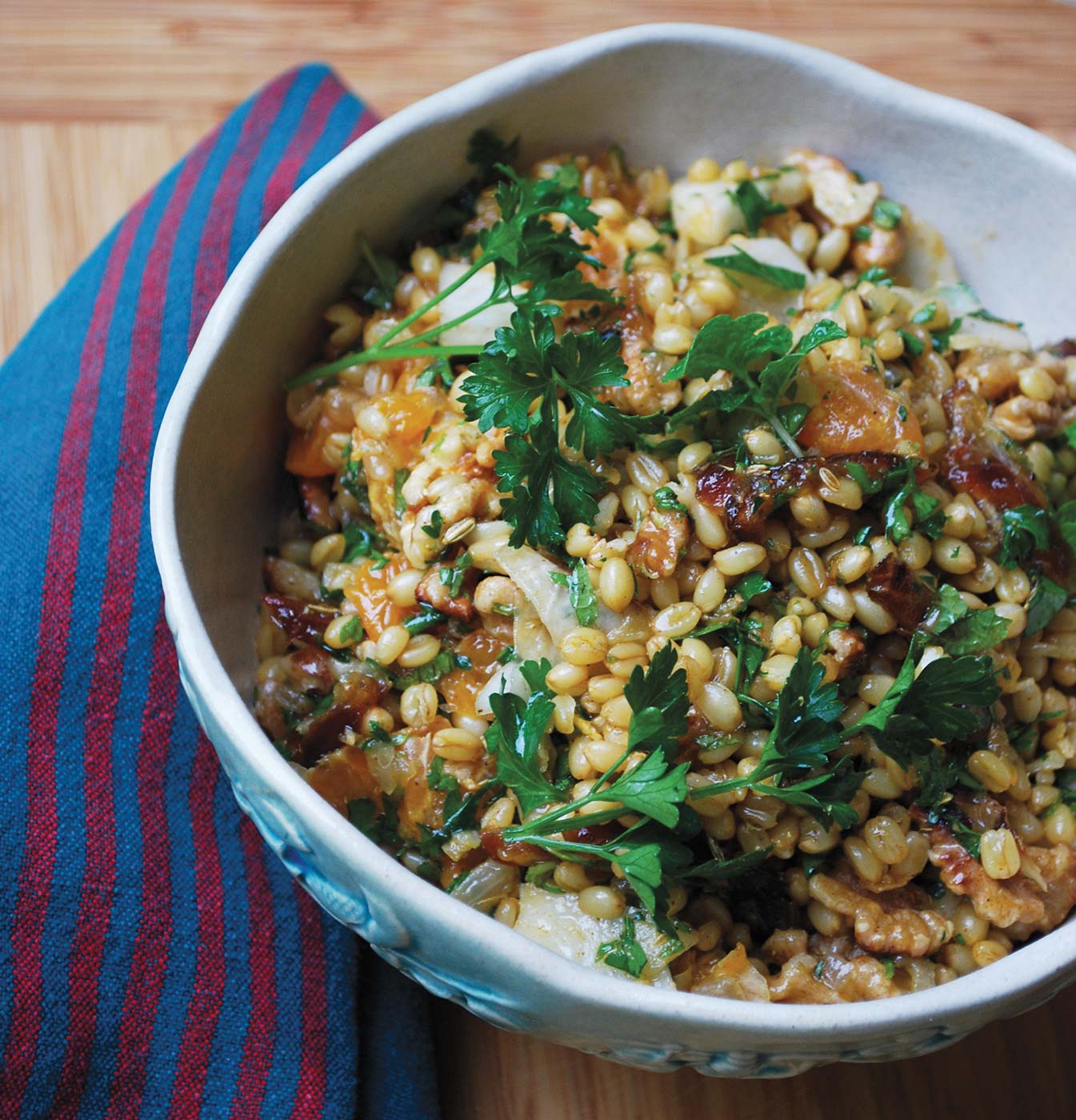 A rich and flavorful pairing of winter salad and warm pie. 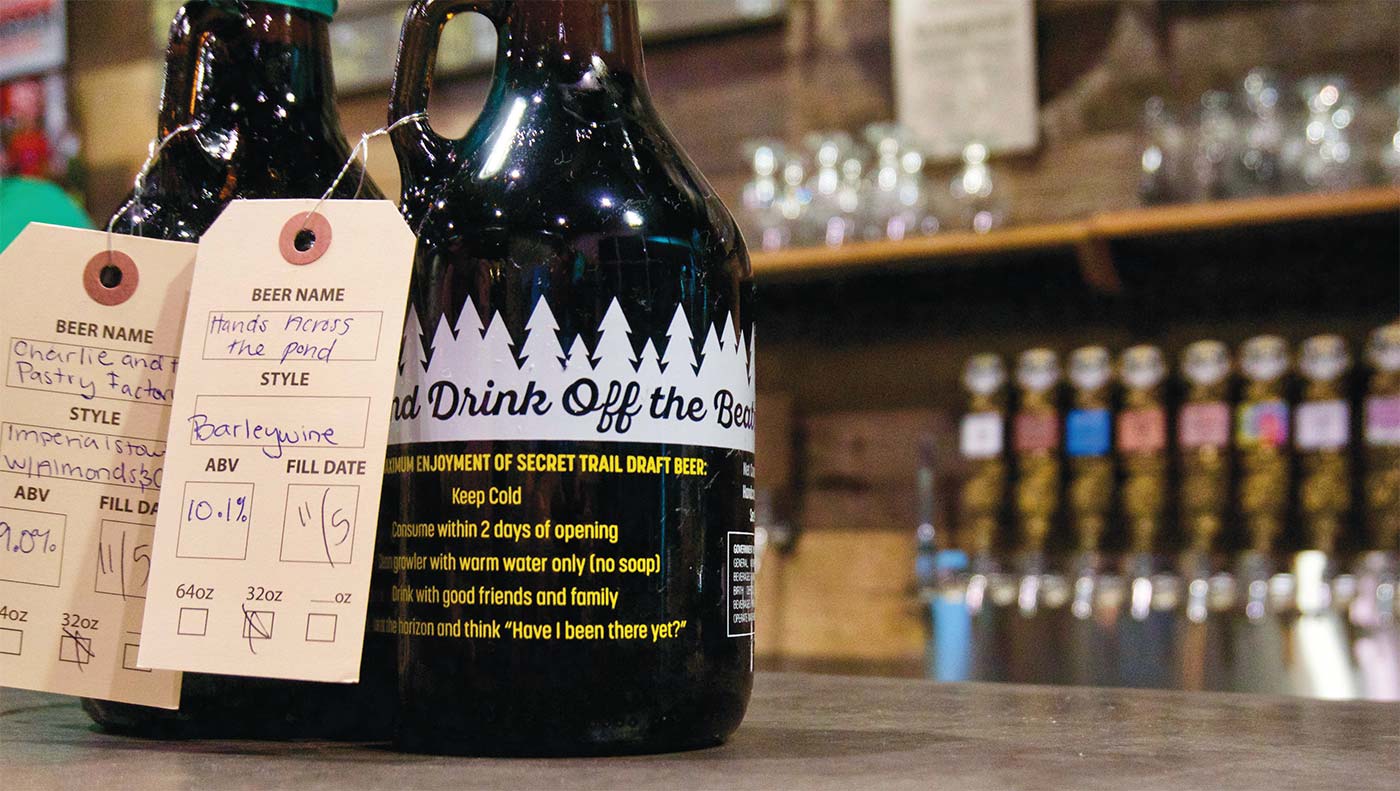 I don’t know about you, but when the weather turns cold, I make gravy. I also trade in my lagers and pilsners for porters, stouts, and malty pale ales. It’s in this spirit that I share with you three warm,... 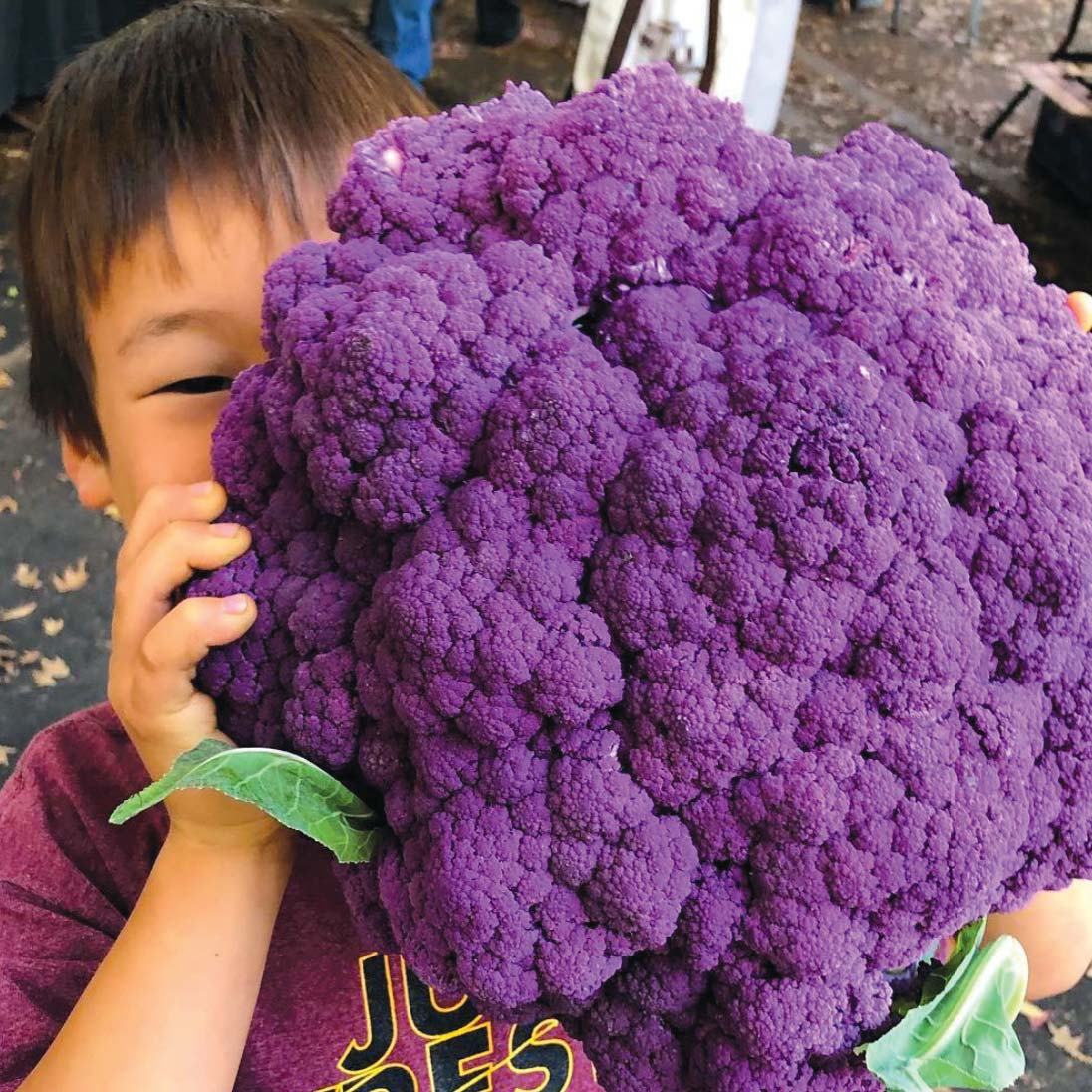 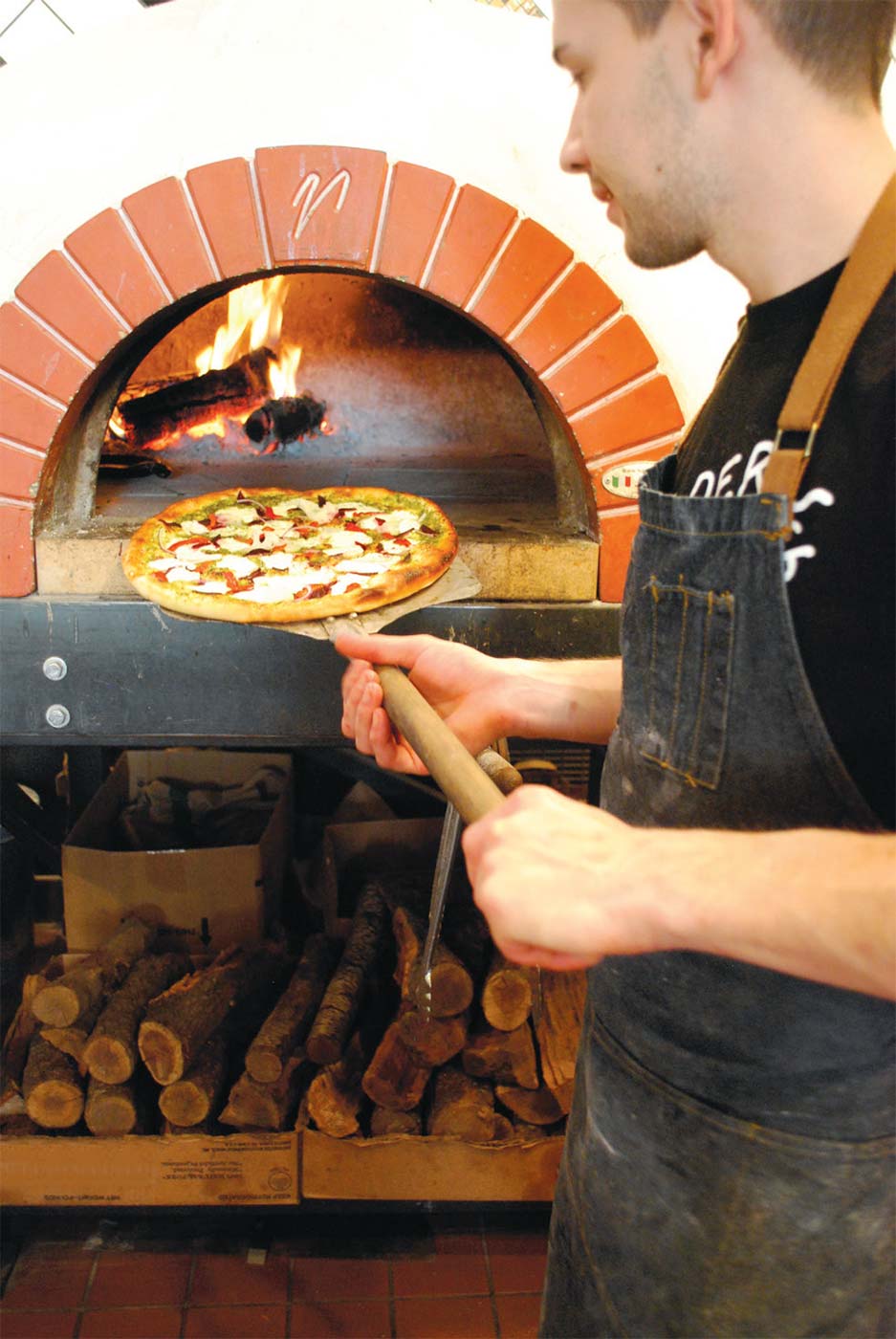 Used as an adjective in TLC, “tender loving” might sound cliché. But in the case of Tender Loving, a new café in Chico, it’s “an ideal,” explains co-owner Heath Dewey. “It refers to the coffee and food we offer and... 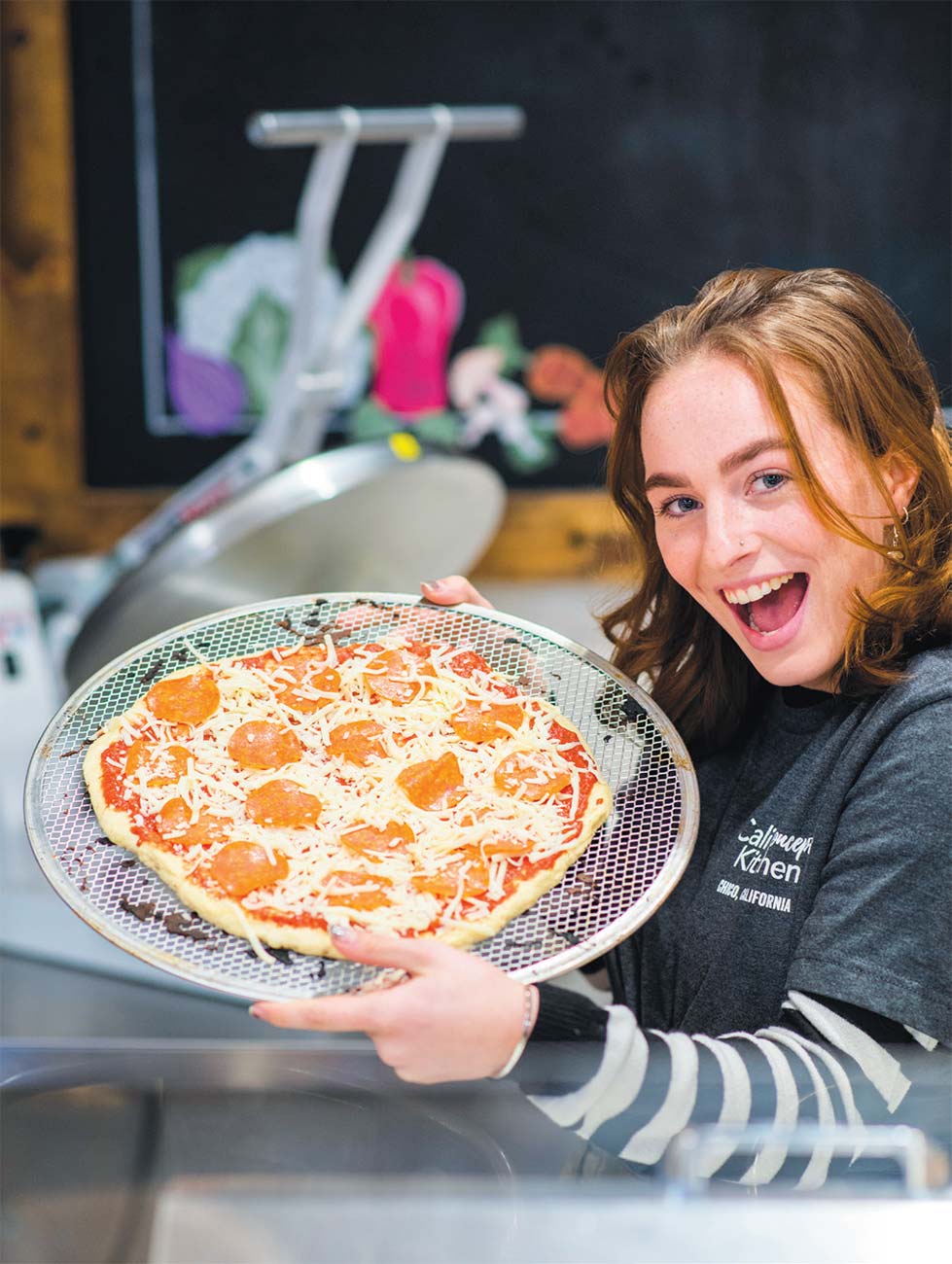 Where did the head of cauliflower grow up? Cauli-fornia! Actually, that is no joke; in fact, 90 percent of America’s cauliflower is grown in California, and considering the vegetable’s recent climb to veggie super-stardom, this bodes well for farmers. This... 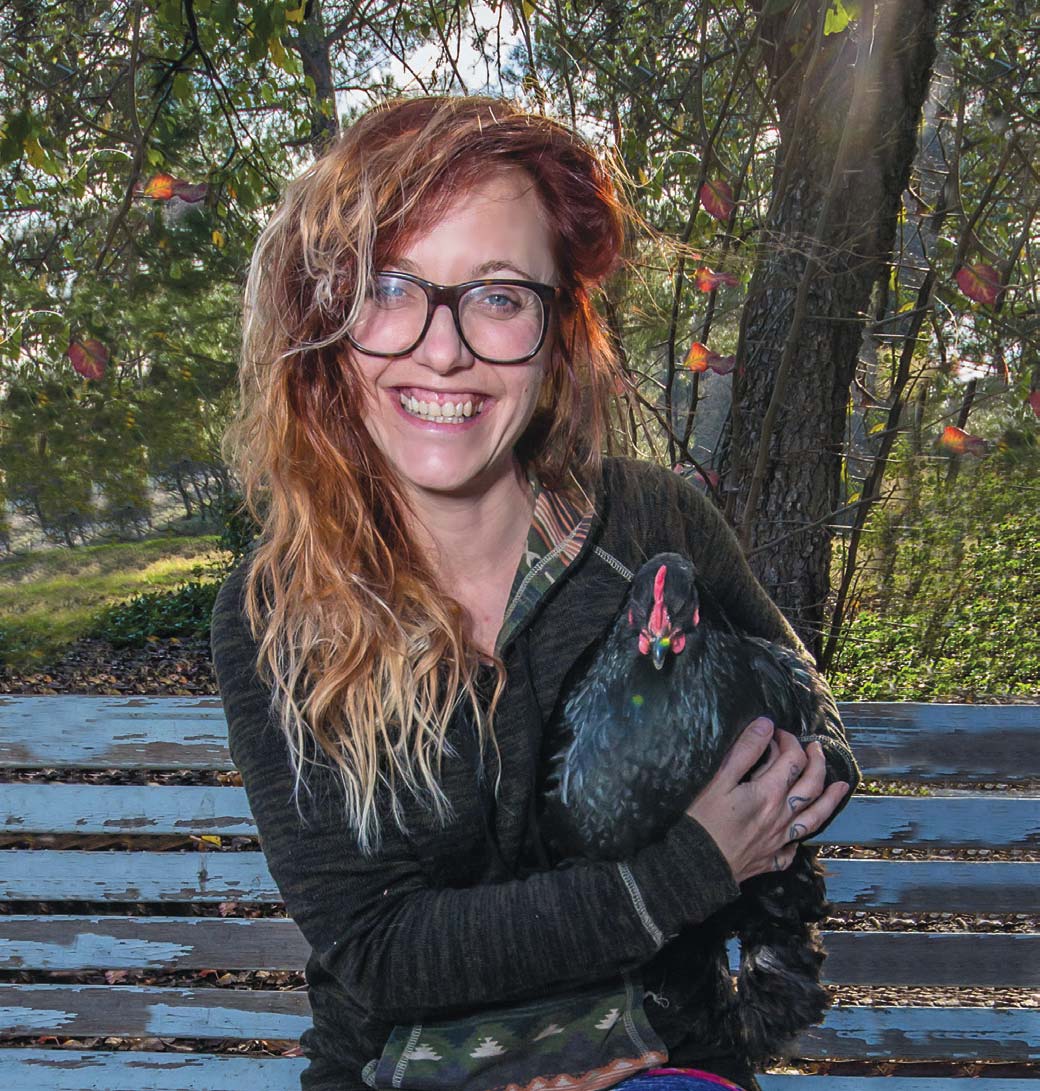 Last year at this time, Chef Yess came to our attention when her food delighted us at Tehama Together’s first presentation of photos from their Farmers in the Field contest. The food she prepared, as is her wont, used products... 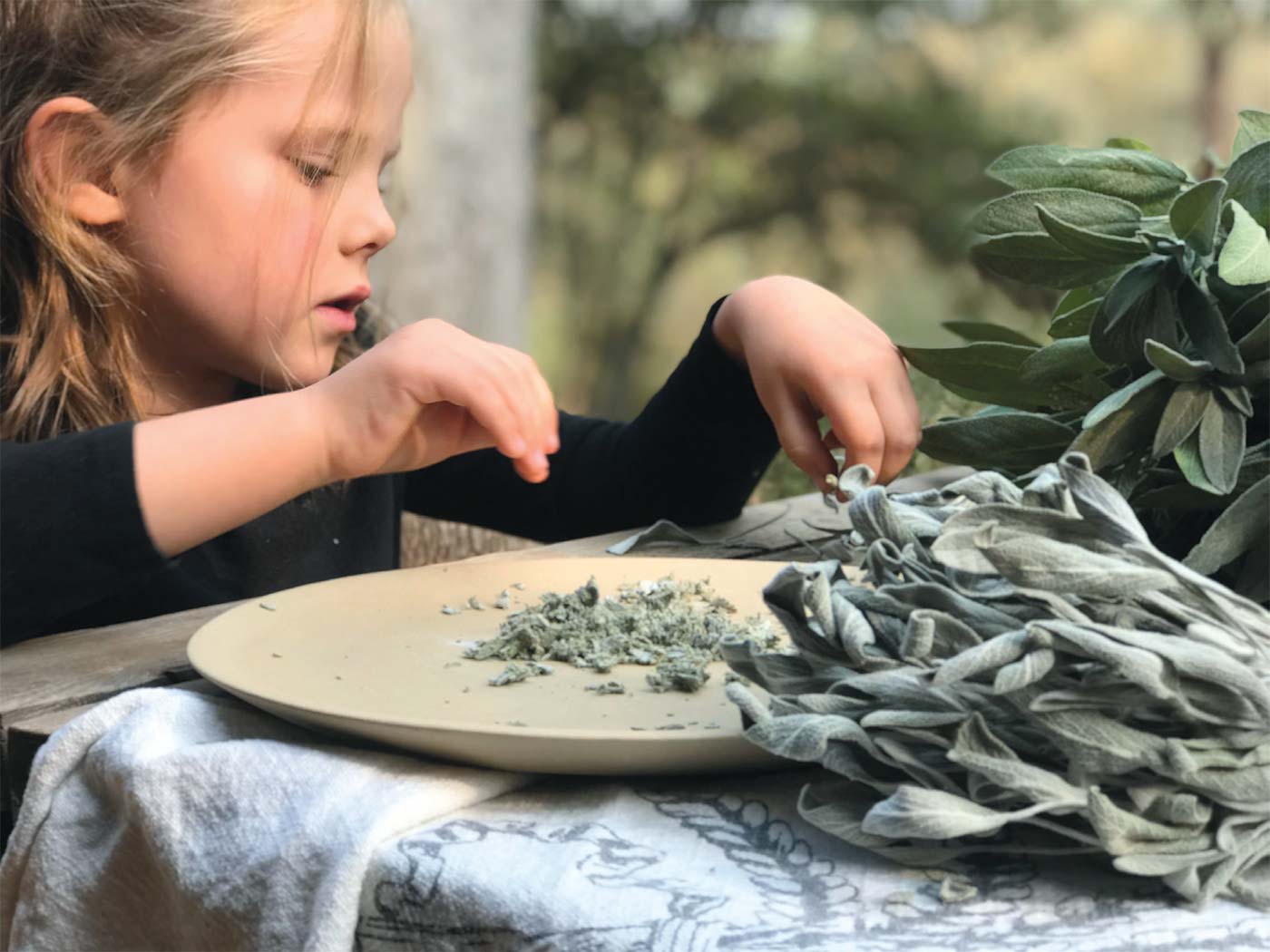 Haven’t we all been given gifts that, though we’d never think of getting them for ourselves, are some of our most valued possessions, treasures we didn’t realize we needed until they were so generously handed to us? “How was I...