For example, he knows mushrooms are more like animals than plants because they breathe oxygen and exhale carbon dioxide. He started growing them as a hobby in south Siskiyou County and realized there was a niche for sales when friends and restaurants requested he share. He got his license in 2015 as Mount Shasta Mushroom Company, and he now grows four varieties of pearl oyster and lion’s mane mushrooms.

He sells to grocery stores and restaurants and also sixty pounds each week at farmers’ markets. That’s 160 six-ounce cartons at the markets alone!

Having migrated to the area from Sacramento about twenty years ago, Kevin has also made his mark as a chef and currently creates special menu items at Dunsmuir Brewery Works, the brewery/restaurant in town, when not tending his mushrooms.

He starts the production with mycelium—the threadlike vegetative part of mushrooms—growing in a sterile culture of light pilsner malt and dextrose in distilled water. He combines this with sterilized organic rye berries, yielding what’s called spawn. His teen-aged son then uses the spawn to “seed” or inoculate pasteurized organic straw. He then bags the inoculated straw in plastic, where it colonizes, and labels it. Kevin puts the bags in the greenhouse, where high humidity and fresh air exchanges simulate a storm or wet weather, and stimulate the mycelium to fruit and propagate. This is not the greenhouse you’d imagine. Most of the roof is black plastic, since mushrooms don’t grow in direct sunlight, and a hefty humidifier keeps the air misty.

Kevin harvests by nudging clusters of delicate mushrooms off the bags, where they have grown through holes in the plastic. One pound of dry raw materials (rye berries and straw) yields one pound of fresh mushrooms in three fruitings— or harvests—per bag. That’s 100% bio efficiency.

These mushrooms, high in iron and anti-oxidants, extend their efficiency by building immunity in the consumers, and, attests Kevin, they’ve been found to be anti-carcinogenic. To offer their full nutritional benefits, mushrooms must be cooked. Before cooking, store them in paper bags in the refrigerator.

Mushrooms now can go in pasta, on bread or grains or other vegetables or on meats. Or they’re great as a side dish.

Kevin extends his passion beyond the growing and selling. He gives bags of spent growing medium to farmers and other people in the community to add to their compost for building healthy soils. He’d like to do a hands-on mushroom-growing workshop in the fall, if there’s interest.

You can find Kevin and his mushrooms at the Redding Saturday farmers’ market until November, the Mount Shasta market through October, and occasionally at the Dunsmuir market throughout its season. Contact him at kevinlrodericks@gmail.com.

SAUTÉED MUSHROOMS Check out this recipe 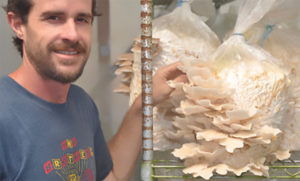 Occasionally enjoying a meal out, the Kesslers also grow lots of their food in Mount Shasta in their neighborhood garden and now have a new greenhouse with little veggie plants sprouting. They are volunteers with School CAFE (Culinary Action for Education), working to improve school children’s meals. They were founders of Shambani Organics and maintain close ties with Eritrean friends they met while serving in the Peace Corps in the 1960s.