A tiny, iridescent, hard-shell candy ball sits atop a mountain of swirled frosting, a signature symbol on a cupcake made by local baker, Denine Owen. The balls are Sixlets candies and color-code the dozen flavors available to Denine’s Cupcakes’ customers on any given day—this despite the Covid-forced closure of her six-year-old downtown Chico bakery. Closing the downtown shop did not end her business, and her ability to continue the bakery contrasts with many businesses after these months of pandemic. The numbers vary, but some estimate that up to sixty percent of small businesses have closed due to Covid-19. Denine Owen found a way to pivot, change her business model, and reinvent her approach. Denine’s Cupcakes now operates as home bakeshop, and Denine takes orders, bakes cupcakes to fill them, and delivers the sweet little cakes.

As a graphic designer turned stay-at-home mom of three, Denine did plenty of baking for the kids. Her Grandma Owen was legendary in the family for having baked cakes for the White House.

Denine made cinnamon rolls, pies, and cookies with her grandma. “I didn’t go to culinary school or have any formal training, I just always knew how to bake,” confessed Denine. While on a weekend getaway with her mom in San Francisco in 2005, the two were watching Good Morning America on the television when the show announced an upcoming “Best Cupcake in America” contest. Her mom encouraged her to enter, and thinking it was something fun to do with her kids, Denine came up with a recipe and submitted the required three-minute video. Several months later, the phone rang, and the next thing she knew, a limo had whisked her off to the airport to fly to New York City. She described the next morning at ABC studios as surreal and amazing. “I couldn’t believe it was happening. A shower of confetti dropped on the stage as they announced I was the winner, with my flourless chocolate s’more cupcake,” she recalled (recipe p. 26). She was proclaimed to have made the Best Cupcake in America.

Cupcakes became very trendy and popular in the early 2000s, with chain shops like Crumbs and Sprinkles popping up in big cities and television shows like Cupcake Wars and DC Cupcakes on cable. Th e truth is, cupcakes have been a favorite dessert for centuries. The first known reference in the United States was in 1796. In her cookbook, American Cookery, Amelia Simmons described a cake baked in small cups. Known in England as fairy cakes, the early cupcake was also known as a number cake or 1-2-3-4 cake because of the ingredients: one cup each of milk and butter, two cups of sugar, three cups of flour, four eggs, and a spoonful of baking powder. The little cakes were not frosted, until Hostess popularized the frosted version in 1919 with their frosted and cream filled chocolate cupcake.

News of Denine’s new fame spread quickly in Chico. Her phone started ringing again, this time with people requesting cupcakes. At first, she resisted, telling people that she didn’t sell cupcakes and didn’t have a business. Eventually she relented and began baking for family, friends, and special events. Over time, baking for others went from hobby, to side-hustle, to potentially a viable business. And she was really good at it. She contemplated buying an old beat up ice cream truck and converting it to sell cupcakes. The demand for her cupcakes exploded at such a rate, she shifted gears, abandoning the truck and opting for a storefront. She found a home for her shop in the spot vacated by the San Francisco Florist on Broadway in downtown Chico. Design work came easy with her background in this area. She hired an architect and began to transform the space. Denine’s Cupcakes was born in July of 2014.

Creating cupcake varieties was the next task at hand. Since cupcake boxes are made to fit a half-dozen or a dozen cupcakes, she decided to offer twelve different cakes. She began with the classics. “The chocolate cake recipe was easy, but the vanilla was the hardest of all,” she laughed. “I tried so many recipes, it took months. Everywhere I went, I ordered vanilla cake in search of the right flavor. Even after we opened, I was still tweaking the vanilla recipe.” During her quest for the perfect vanilla cake [author’s side note, this is my absolute favorite—bravo for time well spent], Denine developed the remainder of the recipes. Friends and family were recruited for taste testing until the flavor array was completed. Her three children each got a namesake cupcake based on their favorites at the time. The Quincy, a carrot cake cupcake, is the only true family recipe. The One-Mile Miles was based on her son’s then obsession with Nutella. Eventually this one was replaced with the Paradise, a peanut butter and chocolate cupcake and the only change from the original line-up. The hard-fought for vanilla cupcake is named after her middle child, daughter Stella.

“The beauty of a small town is it doesn’t take long to get your name out there,” said Denine. She had already built a loyal following from the days of baking at home. Daily traffic of high school and university students provided a steady flow of customers. Denine began supplying dessert for events and occasions large and small all over Chico. The business was thriving. One longtime customer, Dixie Hulley, had Denine make cupcakes as party favors for her and her husband Jack’s sixtieth wedding anniversary celebration. “I wanted to have as many kinds as she could make; they are all so wonderful,” Dixie said. Denine put it this way: “Getting a cupcake is buying a little piece of joy.”

For her sixtieth wedding anniversay celebration, Dixie Hulley said, “I wanted to have as many kinds as Denine could make. They are all so wonderful.”

AND THEN, PANDEMIC—AND PIVOT

Denine’s Cupcakes entered its sixth year downtown and continued to flourish. “I learned as I went, asked questions, and stepped up to my mistakes. If I can do it, anyone can,” she said. But then, on March 19, 2020, the shelter-in-place order resulting from Covid-19 brought the baking to a screeching halt. Denine said she believes that she and her partner, Tricia Davey, were the first downtown Chico business owners to close. She explained that their employees were all college students whose families wanted them home. And, like many of us, they thought the closure would be temporary and short-term. And then it was neither. Success of a bakery relies on gatherings, functions, and celebrations, none of which were allowed. Things didn’t look good. “You have to sell a lot of $3.50 cupcakes to cover downtown rent,” lamented Denine.

In an effort to stay solvent, she fell back on her graphic design training and came up with an array of inspirational colorful stickers for online order. “I hand cut hundreds of these stickers and for a while, this saved my hide,” she said. A friend suggested she create cupcake baking kits for people to use in their homes. “People flocked to the cupcake kits. The kits were a feel-good item and a huge success. There was so much support for me and really all downtown businesses,” Denine recalled. Five months later, when it became apparent that the timeline for this pandemic would be long and their lease was running out, the hard decision to close the shop permanently had to be made. “It was emotionally very tough with dark days and lots of tears,” confessed Denine. The ensuing outpouring from the community was immediate. Dixie Hulley said, “When I saw on television that the shop was closing, I thought, what a loss for Chico.”

After giving thirty-days’ notice to the downtown location, grieving the loss of the storefront, and really wondering if this was a sign to shift careers, Denine pivoted. She realized that unused space off a detached garage on her property could be repurposed, and the dream carried on. With the help of some contractors and sweat equity from family, a small but mighty home-based commercial kitchen was created. When fans saw this news on social media, which has been the primary mode of communication and promotion, they exploded with joy—and orders. Th e business now operates with a pick-up and delivery model. The cupcake varieties remain the same.

Orders are taken via text, phone call, or email. Denine has continued to offer a weekly special, mostly flavors spurred by a customer requests along with seasonal favorites. Terence Lau, a Denine’s regular, commented, “Just like the town of Chico itself, Denine’s has shown tremendous resilience in moving to a different delivery model. My family is thrilled!”

Denine said she is now busier than ever. She has been flush with cupcake orders every week, continually selling out of extras. She sees the silver lining in the fact that now the money that had been going toward rent is helping to pay the mortgage on their home. She feels more confident than ever in her career choice. “When people used to ask me what I do and I said baker, it didn’t feel like I had a real job. The truth is, I love it and it’s absolutely what I’m meant to do.”

As if she wasn’t busy enough with cupcakes and raising a family, Denine decided she wanted to give back to the community that has been so supportive. Prompted by her sticker designs, she created plans for a colorful mural to adorn a downtown wall near the former shop. A GoFundMe was created to pay local artist Jedrek Speer to paint the design, in Denine’s Cupcakes’ shop colors. It’s a project of the heart and a reminder that we need one another to get through the good times and bad. Th e mural is one powerful, colorful word, “together.” Together we face these unprecedented challenges. Together we rebuild. Together we reinvent. 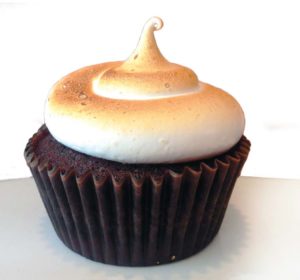