‘MY MOM DEALS IN PRODUCE!’

Just a few months after starting Field to Fork Tehama, a multi-farm CSA serving members from Orland to Redding, Rachelle Gould was taxiing three six-year-olds to Hawes Farm on a field trip. She eavesdropped on their conversation. In the back seat, the first graders were talking about their parents’ work. “My mom,” bragged her daughter Maggie, “deals in produce.” Gould felt a sense of pride, echoing her daughter’s tone of voice. Yes, she deals in produce.

As Gould tells it, Field to Fork Tehama’s creation story begins in the swirling realm between wakefulness and sleep. “All kinds of things were running around my head at night,” recalled Gould. “And then one night, as I was falling asleep, the idea of a multi-farm CSA came to me.” In the light of the following days, she researched, consulting economists and others, and discovered that studies of the North-state had revealed the area’s potential to satisfy its population’s food needs. She could help connect North-state residents to food grown here, sold here, and consumed here.

Gould launched Field to Fork Tehama in June 2018 with six customers, some of whom are still members. She originally sourced produce from four farms, Kitchell Organics and Burlison Fruit Stand in Los Molinos, Farmelot in Vina, and GRUB CSA Farm in Chico, especially for its winter vegetables, and meat from Rancho Llano Seco in Chico. Over the two and a half years since its founding, she has sourced Field to Fork Tehama produce, as well as protein, from Glenn to Shasta counties, including produce from Providence’s Garden of Hope Farm in Redding and lamb from Chavez Family Farm in Orland. The CSA’s suppliers read like a roster of well- and little-known farms in the region: Bianchi walnuts, Llano Seco, Wookey, and Big Bluff ranches, Farmelot, Red Gate Farm, Moau’s Farm, Alldrin & Sons salmon, Ferrin Family Farm, Small Town Specialties, Fulfilling Fields, Farmstead Meats, Hooker Creek, Comanche Creek.

During one recent farm pick-up, Farmelot’s co-owner James Brock praised Gould for the way she works with the young people on the farm. Brock is a huge advocate for them; he knows farmers are an aging population and the future of farming lies in opportunities for young farmers. Gould deals solely with Tristan Lake, a young manager at Farmelot, and, Brock says, that’s given him experience and expertise in the marketing side of the farm.

It’s got to be an immersion experience, locates and specifies each week’s offerings. Currently a hundred families subscribe. Membership jumped sixty-six percent after stay-at-home orders due to the pandemic, from sixty to a hundred families, just from the end of March through April. Membership fluctuates some, as some families pause to leave for cooler climes in the summer or grow their own summer gardens.

Options include monthly or quarterly subscriptions, and members have the ability to take up to two weeks off. They order small- or family-sized weekly boxes, either all produce or produce and protein combined. The CSA also offers an astounding number of add-ons: cheese, butter, honey, dried beans, olive oil, vinegar, pickles, rice, eggs, almond butter, sauerkraut, raw milk, coffee, bread and other baked goods. The list is ever-growing and ever-refined, dictated by members’ requests and sourced from local producers. Gould makes it easy to add on—just order by Saturday and add-ons are delivered in the next week’s box.

Such are the choices of add-ons that Field to Fork Tehama CSA members told me they no longer buy their food at a store. Alexis LeClair of Red Bluff, a mother and fulltime, commuting worker, loves that “I don’t have to go get my food.” The family has chickens and a guinea pig, who also benefit from the weekly boxes when their bounty proves too much for the family. Another CSA member, Melanie McKenna, reports that she has not bought meat, except for salami, since joining the CSA this spring. She rattles off chicken thighs, bacon, chorizo, and pork chops as recent meat components in her box, each sourced from local ranches. “I love that it’s minimally processed”—at USDA certified facilities—“straight from a local ranch. The meat is phenomenal; it tastes different,” she reported. (She also reported her dog enjoyed a roast. They returned home late one delivery day to discover an unlatched gate, a fancy-free dog, and a CSA crate minus one roast of beef.)

Gould has to be organized in order to make the CSA work, and she manages the business in a five-day work week. Mondays she handles accounting, plans the pick-up from farms, organizes add-ons for the boxes, and reviews which customers want what. Every Tuesday, Field to Fork picks up from farms and ranches, develops maps and spreadsheets for customer deliveries, and Gould writes the newsletter that goes in each member’s box. Spreadsheets include bits of information on each member, for example, the name of the family dog, so that the delivery person can greet the animal by name. Newsletters include a list of what’s in each week’s box, a short story about the CSA or one of its supplying farms, and a recipe or two that use the box contents.

Eight hours of delivery on Wednesdays transport weekly boxes to members from Cottonwood to Redding, and a bit shorter Thursday delivers the rations to members in Red Bluff and Corning, and to a drop-off point in Orland. Since March, it’s been contactless delivery, and there was a longing in Gould’s voice as she remembered doing deliveries herself, before Covid and the Covid-inspired growth in membership, when excited kids ran to meet her on delivery days and invited her into their homes. On Fridays, farm pickups and home deliveries completed, Gould contacts her supplying farms and ranches to plan the contents for the next week’s boxes.

If the weekend, as she hopes, allows Gould family time, the business does as well. She credits all her kids, sixteen-year-old John, eight-year-old Maggie, and four-year-old Claire for helping. Claire is the designated or self-proclaimed taste-tester, munching grapes or carrots while filling weekly boxes, which are returnable wooden crates with a Field to Fork Tehama logo burned onto them. Encouraged by her mom, Maggie gamely calculates the addition and multiplication involved in assuring the boxes are filled equally.

EATING OUT OF THE BOX

But the biggest effect on the family, reports Gould: “We eat seasonally now. We didn’t plan it, it just evolved without our trying or noticing.”

It’s a transition CSA members note, too, when asked how their subscription affects their families. They mention eating unfamiliar fruits and vegetables, leaning in to okra, developing a fancy for eggplant chips, roasting tomatoes for salsas and sauces, working up a newsletter recipe for enchilada sauce with smoked tomatillos. They say that they feel better eating this fresh food and that they love supporting local farmers and ranchers. Many garden at home in the summer, and they continue weekly deliveries because deer eat their green beans and tomatoes and because they can’t match the variety of vegetables and fruit offered in the crate.

Gould has reason to be proud of dealing produce. She says she’s especially proud to retain so many members, who often return their wooden crates with a note inside. “We love everything you do!” reads one; others read simply “Thank you!” Gould keeps a shelf of such cards in the outbuilding repurposed with walk-in coolers and other storage for the CSA’s add-ons. She especially likes serving the CSA’s older, shut-in members with health problems, as that seems an additional service. She’d like to keep expanding, but only if she can continue sourcing from local farms and ranches. She’s certainly made a prodigious start. 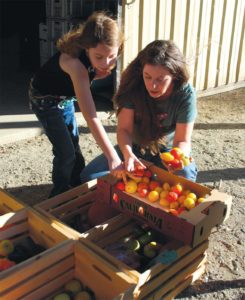 Earl Bloor and Candace Byrne were introduced to Edible Communities when Candace googled “sustainability Cape Cod” and the search revealed Edible Cape Cod. After Candace wrote for both Edible Cape Cod and Edible Sacramento and the couple saw first hand how the publications encouraged sustainability in two very different locales, they embarked on their own publication, Edible Shasta-Butte. This new venture, grounded in Edible Communities’ goal to “connect consumers with family farmers, growers, chefs, and food artisans of all kinds,” complements the couple’s long careers in education. It also takes them back to their roots, when Earl grew up next door to his parents’ eatery, The Spot, in Kincardine, Ontario, and Candace’s mom engaged all the kids in baking and wrapping goodies as gifts for every holiday.