Bringing his own cultural remedies to market for the consumption of the general North State population is Ted Dawson, of the Nor Rel Muk Wintu (Western Northern Mountain People) from Junction City. Ted learned much from his Grandmother Lillian, but he is an accomplished and highly educated ethnobotanist as well. Ted’s sense of humor and his willingness to share his indigenous traditions and extensive botanical knowledge with his community is a rare gift to the North State.

A conversation with Ted may begin with him telling you about a skunk he’s skinned, or that he “forged a bunch of knives the other day,” or he may instruct you to eat dandelion flowers before they go to seed and to put their greens in your salad if you’re suffering a particular gallbladder related ailment. He has a vast knowledge of local plants and where to find them, as his family has lived on North State land forever, generation after generation passing down locations for finding useful plants and recipes for remedies made from them.

When Ted’s dad passed several years ago, he left Ted a small inheritance and Ted decided he would make an honest attempt at turning his hobby into a business. Mountain Wintu Herbs was born. He works to grow and harvest Yerba Santa, a medicinal plant in the mint family, sustainably. This Wild Craft Harvested Yerba Santa is good for a variety of medicinal uses from stomach ailments to colds and flus. He also harvests Oregon Grape Root, which is thought to be good for killing staph infections. Other remedies may include valerian, sunflower, or celery root, and his current favorite, Solomon’s Seal. They all have special medicinal properties that Ted has been able to turn into his remedies.

For many of these roots and herbs, Ted wanders as far as the Marble Mountains, though he is sure to ask permission from the local Karuk tribe to forage on their land. Maintaining these traditional customary respects between tribes is extremely important to Ted. He is careful to engage other tribes ahead of an expedition that may take him trekking into their lands. Also in keeping with custom, when he goes up a mountain to dig Angelica Root, he brings a woman to go digging with him. “Men aren’t allowed to dig Angelica unless they have the blessing of a woman,” he reveals. “It’s a female root; it supports balance in women’s bodies.”

Holding fast to the traditional ways, Ted continues to be a cultural and botanical historian, offering his elixirs, workshops, and plant walks to the community, but as he says, “I’m not running the show here. Every year I go up on the mountain and talk to the Creator and ask him to show me what he wants me to do, and that’s the Creator directing my life.” In the event that Ted is unable to wild harvest his roots and plants, he turns to other organic wildcraft harvesters online.

In his Shingletown cabin he ferments, soaks, bottles, and bags up all his wares for market. He has a small production room and an industrial press for extracting and separating the herb curds. He often packs up his traditional Wintu bark house and hauls it down the mountain into town, setting it up behind his booth. His bark house is an opportunity to talk about Wintu culture and the old ways, helping to remind everybody that Native peoples and traditions are still alive.

DANDELION BREAD Check out this recipe 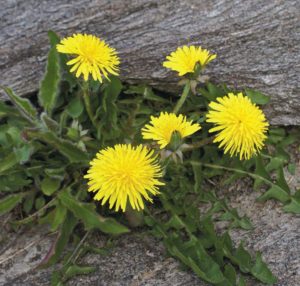 For more information about Mountain Wintu Herbs, find Ted at the Saturady Redding Farmers’ Market, follow him on Facebook, or check out his website, mountainwintuherbs.com. This summer he’s leading a special hiking series in July, a full week-long session on how to make medicine out of plants. Ted leads many talks and gives presentations monthly. Contact him via email, mountainwintuherbs@gmail.com, or phone, 530.474.3257.